From A to B-Corp: Sustainability in the Drinks Industry

Sustainability is very much in all of our minds and the past few years have seen the drinks industry focus more clearly on what it can do to help the planet – but what are we doing?

There are lots of areas of the drinks world where we could be doing better when it comes to sustainability. Identifying those areas is something that stretches across both private companies and activist groups, all looking for ways for us to work better.

On the group side, we have bodies like the Sustainable Restaurant Association. It works with businesses from across the world of food service, as well as like-minded industry bodies, campaign groups and business that supply the sector. Its Food Made Good programme has become a globally recognised standard for measuring sustainability, and through it they have opened the world of sustainability up to companies and groups who may not have otherwise had the opportunity to trumpet their credentials.

On the other side, many companies have been looking into sustainability in very different ways across different areas. We’re going to look at three of them: waste, packaging and distribution.

“If it can’t be reduced, reused, repaired, rebuilt, refurbished, refinished, resold, recycled or composted, then it should be restricted, redesigned or removed from production” – Pete Seeger

One of the key ways that companies have been looking to improve their green credentials is in waste management. This is especially the case with many bars – with so many environmental decisions happening further up the supply chain, ensuring that they minimise waste is an area where bars can have their own direct effect on the environment.

Drinks production is an area where there is also a lot of waste, and producers like Discarded, a project by William Grant and Sons, are looking into what can be done – it focuses on making spirits using the waste from other products as well as reducing waste throughout its own supply chain. It's not all that new – it was awarded Most Innovative Spirits Brand of 2018 by The Spirits Business – but its influence is increasing and is being held up as an example.

Discarded currently has three products in its range: Banana Peel Rum (infusing rum with leftover banana peels), Grape Skin Vodka (distilled from pomace and flavoured using waste from dealcoholising wine), and Sweet Cascara Vermouth (using cascara – the leftover fruit of the coffee cherry once the bean has been removed – as a botanical and a base of fortified wine previously used to prepare casks for whisky maturation).

While the vermouth alone has used 25,000 cups of coffee’s worth of cascara since 2018 as well as 5,000 litres of leftover wine, Discarded has another side that leads to our next aspect of sustainability – its packaging.

Continuing its zero-waste ethos, Discarded’s packaging uses recyclable capsules, labels made from sugar-cane waste and bottles made with 65% recycled glass. It’s a great example of what companies are already doing, but there’s more yet to come.

While bottles themselves are recyclable and often made with recycled glass, many companies are looking beyond the traditional glass tall-round, and trying to find alternatives.

A good example is Avallen, producers of a very modern Calvados. The company already has a solid backbone of sustainability, with locally sourced apples reducing food miles, a partnership with the Bumblebee Conservation Trust and carbon-negative production (without offsetting) all leading to its being awarded B-Corp status in January 2022. 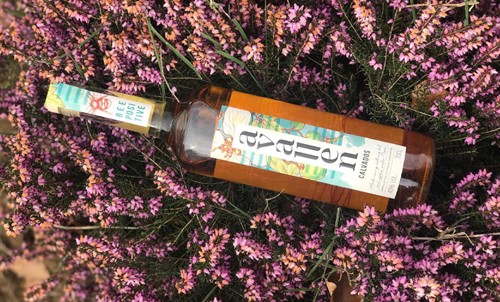 On top of that, it has recently launched a paper bottle with Frugalpac. It’s made from 94% recycled paperboard and not only produces less than one-fifth of the carbon dioxide emissions of a regular glass bottle but also weighs just 85g, reducing transport emissions at every stage of its life.

Along with the reduction in emissions from the new bottles, Avallen have also partnered with ecoSPIRITS to further address the next area where we can make a difference.

From the moment a spirit is bottled until the moment the bottle is emptied and disposed of, it is moved around the world and causes harmful emissions from the various modes of transport it employs. While the focus is often on the post-use world, there’s much that can be done at the distribution end, especially if companies start taking an end-to-end approach. Bottle deposit schemes have been a mainstay of the market since the earliest days, but there are moves to take things a step further. 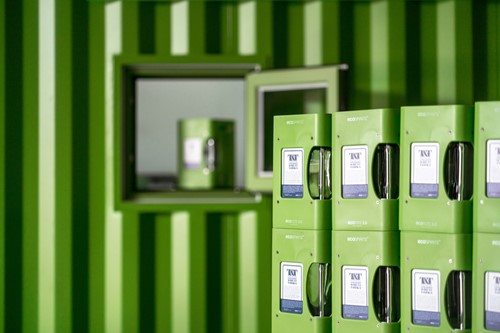 EcoSPIRITS, as mentioned above, are a company who are closing the loop – rather than using recycled glass and hoping that some might be re-recycled down the line, they have their own containers, which can be used, returned, cleaned and refilled. These 4.5-litre ecoTOTEs are filled at the company’s ecoPLANT, where large containers of spirit are delivered by their various partners, including Diageo and Pernod Ricard as well as smaller producers like Fair and Takamaka rum. Once the ecoTOTEs are emptied, they’re returned to the ecoPLANT, where they are cleaned, refilled and shipped out again.

As well as reducing distribution emissions and costs – the ecoTOTEs are not boxed and are shipped by palate before local distribution – they also stack to reduce space needs, very important in the crowded stock rooms of the far east, where glass recycling rates are some of the lowest in the world and where ecoSPIRITS has focused its launch. With worldwide partnerships in place, this is only the beginning of an industry-wide move to more sustainable distribution.

To learn more about these topics and more, join us at Raising the Back Bar on Monday 9 May 2022 for our from A to B-Corp masterclass. National sales manager Eddy Renner will be joined by Louisa Dodd (senior project manager, Sustainable Restaurant Association), Callum Fraser (UK brand ambassador, Discarded Spirits), Tim Etherington-Judge (co-founder, Avallen Spirits) and Eve Mignot (sustainability manager, ecoSPIRITS) to talk about they’ve done and what we can all do to be more sustainable. It’s free to attend the event, but you need to sign up in advance.